Hakuoki: Kyoto Winds is a Visual Novel rereleased for PC and PlayStation Vita in 2017 by Idea Factory. The game is of the Otome genre with a rich story set in 1860s Japan.

There are many games in the Hakuoki series, the first being released for PS2 in 2008, but the series spreads over a variety of consoles including the PSP and Nintendo DS. Hakuoki Shinkai: Fuukaden was released for PS4 (Japan only) last year and is also coming to Nintendo Switch in September 2018. This version contains both Kyoto Winds and Edo Blossoms.

I’m not familiar with the original games myself, but I believe it was originally released in separate chapters. However, the rerelease has divided the whole story into two separate parts: Kyoto Winds and Edo Blossoms. This review will be specifically for the first half, Kyoto Winds, which equivalents to Chapters 1 to 5. I will be playing Edo Blossoms (the second half) very soon and I’ll write a review when I’m finished. 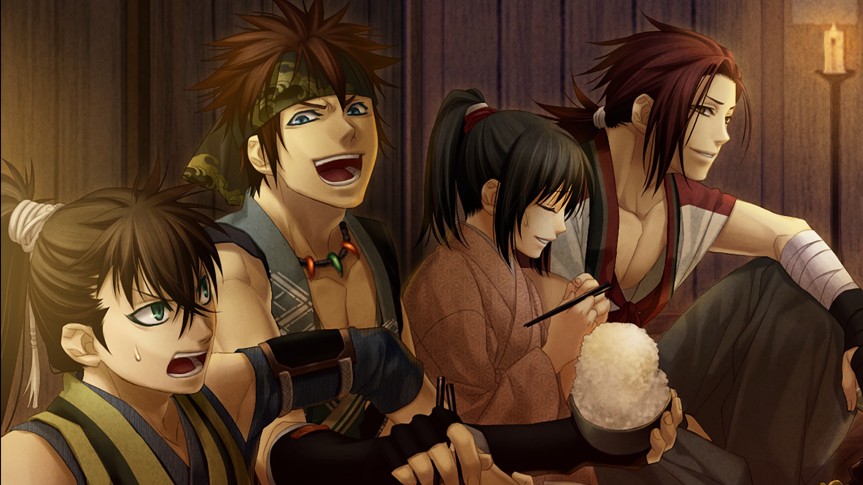 Beginning in 1863, the story follows Chizuru Yukimura who travels from Edo to Kyoto in search of her father. After witnessing something she shouldn’t have seen, the Shinsengumi take her in, only for Chizuru to discover that they are also in search of her father. The story also follows the events of the Boshin War during the Meji Restoration in Japan with historical and political elements. The protagonist’s default name is set to Chizuru, but you can change it if you wish.

Hakuoki: Kyoto Winds is an interactive visual novel with a focus on decision making. Depending on your decisions throughout the game, you will experience a number of different endings. There are 13 separate paths in total evolving around the particular man you choose to get closer to. Excluding Chizuru’s ending, the other 12 paths have 3 alternate endings that depend on your choices during Chapter 5. I recommend the first playthrough being your own choices, then opting to use a guide to find the other routes. Although the routes do not need to be experienced in a specific order, I highly recommend leaving Kazama’s ending until last.

In total, I invested 66 hours into Kyoto Winds, 12 of which were on my first playthrough. As you progress further with different character paths, scene repetition will become common, particularly in the early stages of the game. Thankfully, there is a skip function which quickly scrolls through all the text and will stop when it reaches a section that has not yet been read. This really helped me out as I didn’t want to reread everything multiple times, saving a lot if time in the long run and needless button mashing.

In total, there are 13 playable routes involving different characters. In the original version you could follow the stories for Hijikata, Saito, Okita, Heisuke, Harada and Kazama. Additional routes were added for existing characters Nagakura, Sanan and Yamazaki who were present in the original series but did not then have playable routes. There have also been 3 brand new character additions who were not involved in the original game – Iba, Sakamoto and Souma. Personally, I found the three new character endings thoroughly enjoyable as the story differed a lot from the Shinsengumi’s routes. They provided refreshing storylines and gave more detail about other aspects of the game we wouldn’t have delved into otherwise.

I’m also a big fan of the art style, giving a traditional feel to compliment the time period in which the story is set. It gives a sense of the traditional ink style paintings typical to the Edo period with the grainy looking filter and even the colour schemes. There’s also a lot of character art depicting scenes from the game and incorporating Chizuru into the visuals. These help to set the scene and visually display characters’ emotions/interactions more clearly, as well as being pretty to look at which is always a bonus!

While on the subject of art, I can’t forget about the music. All the music is beautifully written, emphasising the emotions and actions to go alongside the events of the game. Music always helps carry emotions in any form, so I was pleased at how well everything pieced together to create the desired atmosphere. 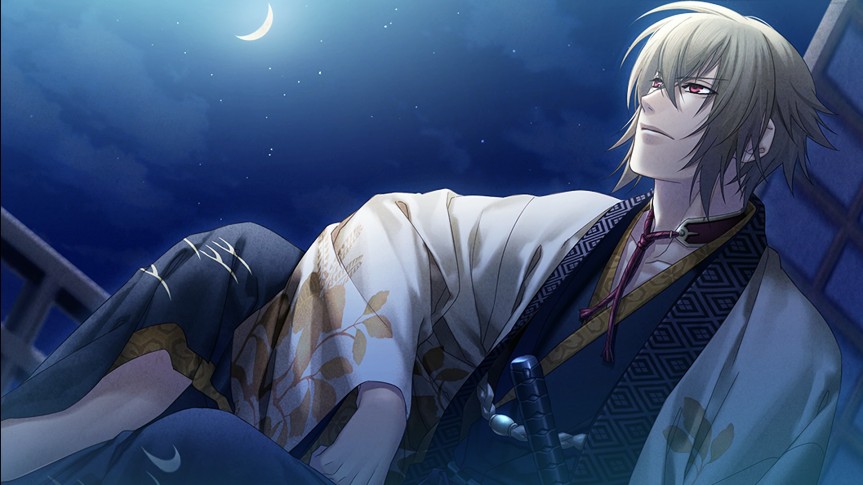 The characters are also fully voiced, with the exception of Chizuru, providing a deeper sense of character and, in my opinion, more engaging content. Although the voice overs are only available in Japanese, you can still hear the emotions in their voices as you’re reading the subtitles. This wasn’t an issue for me anyway as I’m used to watching films and anime in different languages with subtitles, so it was a positive contribution to my experience as well as it adding to the historical Japanese setting.

The interactions between characters are also really well executed. The banter between Heisuke, Harada and Nagakura for example can be quite comical which contrasts to the seriousness of the story line. Getting to know all the characters is a crucial part of the game, but it’s also interesting to see different sides to certain characters.

I only stumbled across a few minor issues. The main problem I found was that sometimes the dates wouldn’t add up. The years would be different on the Chapter screens than they were in the opening story sections which added some confusion in places. A lot of time passes between scenes in some cases, so sometimes it can be a little difficult to follow and the mixed up dates definitely don’t help… they even go back in time in some instances.

The language appears to have been really well translated and I don’t believe I found any issues with mistranslations, however, some of the text had been repeated at the end of some sentences in Chapter 5. I noticed this in a few different routes, but it only ever seemed to be in Chapter 5. I don’t believe this to be mistranslation due to the words repeating, but it just seemed like no one had gone back to proof read and left them in by accident. Minor issues, but the game would have been a lot smoother without them.

Hakuoki: Kyoto Winds has become one of my favourite games. I don’t remember the last time I was so eager to keep progressing with a story, or the last time I 100% completed a game. I even went as far as buying the first Season of the anime which I watched recently and now I’m so excited to start Edo Blossoms!

I would highly recommend this game to anyone who likes visual novels, and even to people who are looking for something with a good progressing story. Although there are romance aspects, there’s nothing graphic in the slightest and the story is really interesting. There’s also a lot of content due to the different endings, but the story is still meaty enough to enjoy a single playthrough.

Have you played Hakuoki: Kyoto Winds or any of the other Hakuoki games? If so, let me know your thoughts in the comments!